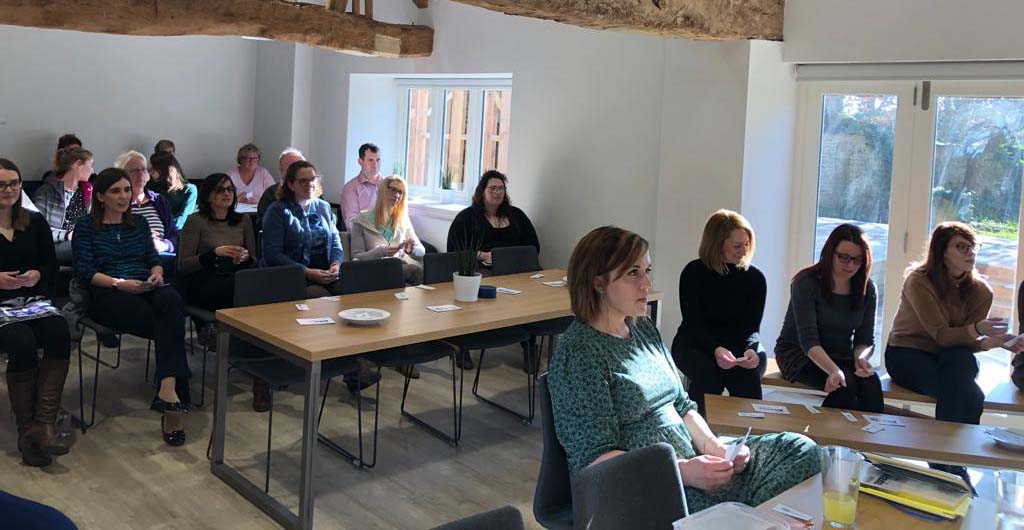 To mark Rare Disease Day 2020, Oxford PharmaGenesis held a series of talks in the Oxford office that focused on the patients’ perspective of living with a rare disease. Colleagues from the Oxford Central, London, Cardiff, Cambridge and Philadelphia offices dialled in to take part.

The afternoon kicked off with an interactive workshop hosted by Adeline Rosenberg, Associate Medical Writer, and Fran Ounsworth, Account Executive. Adeline and Fran both live with a rare genetic connective tissue disorder called Ehlers–Danlos syndrome. The workshop opened with an introduction to the disease and to Spoon theory, a metaphor used to explain what life is like with a chronic illness and the importance of energy budgeting. Christine Miserandino, a patient with lupus and a chronic illness advocate, first proposed Spoon theory in 2003. Her theory was recently illustrated in an online article: “when you’re healthy, you have a never-ending supply of spoons. When you’re sick, you need to know exactly how many spoons you have.” (MTV.com)

The workshop attendees took part in an energy-budgeting exercise with 15 paper spoons representing the energy expenditure required during a hypothetical weekend comprising different daily activities, such as having a shower, going out for lunch, doing the laundry and reading a book. Once the participants had run out of spoons, they had no hypothetical energy remaining for any further activities. The exercise demonstrated the frequency and importance of these micro-decisions on energy expenditure that people with chronic illnesses need to make throughout the day, every day. The Oxford PharmaGenesis Chairman, Graham Shelton, commented that in his hypothetical weekend: “I did no cleaning, no laundry, but I did have some fun!”. In Christine Miserandino’s words: “You can’t do it all”. (MTV.com)

Next, friend of Oxford PharmaGenesis and Founder of Ataxia and Me, Alan Thomas, presented his patient story or, as he calls it, his patient adventure. Alan described his struggle for a diagnosis, how he came to found Ataxia and Me, and all of the milestones achieved since. It took Alan almost 9 years to receive a confirmed diagnosis of ataxia, which is a term for a group of rare neurological disorders that cause a global loss of coordination; after repeated appointments with his usual GP, it was only due to the knowledge of a locum GP who recognized the signs of ataxia that Alan was finally referred for a number of neurological tests that led to a diagnosis. Alan was motivated to found Ataxia and Me to raise awareness of the condition and to “start a charity that was different to the normal medical charities, to share knowledge of other patients, empowering other patients”. When asked what role the pharmaceutical industry can have to help people with a rare disease, Alan said: “talk with us, not to us; it’s a slight difference that makes a huge difference”.

To wrap up the afternoon, members of the Oxford PharmaGenesis Rare Diseases Team gave presentations on some of their work and on how medical communications can make a difference to the lives of patients. Andy Sheridan, Group Communications Director, spoke about the company’s passion for rare disease research and described how some of the earliest work in the history of Oxford PharmaGenesis was in the field of rare diseases. Providing a writer’s perspective, Jessica Hardy, Senior Medical Writer, shared how working with small patient numbers enables a greater appreciation of individual patient stories. To finish the afternoon, Rachael Tidbury, Project Coordinator, explained how her attendance at patient advocate workshops and events has enabled her to see first-hand the real-world effect of the work of Oxford PharmaGenesis.

Meanwhile, ‘down under’, the Oxford PharmaGenesis Melbourne office, accompanied by Chris Winchester, Chief Executive Officer, and Paul Farrow, Group Communications Director, had the privilege to hear from Kris Pierce, Founder of SCN2A Australia. SCN2A is a rare genetic condition that can cause either gain of function or loss of function of sodium channels, resulting in developmental and epileptic encephalopathies. Kris and the team discussed how SCN2A affects patients and their families, the work that SCN2A Australia is doing to help families, researchers and clinicians, and what research is currently being conducted into the management of SCN2A.

Following such an engaging programme of events for Rare Disease Day 2020, Oxford PharmaGenesis is looking forward to future endeavours in the field of rare disease research and awareness, particularly with the aforementioned charities, as well as other organizations, to work towards building a patient-centred community at the heart of medical communications.